Lecture description: Quantum computing represents a new computing paradigm that directly exploits the laws of physics to perform “interesting” computations. In particular, if someone could build a sufficiently large quantum computer and run Shor’s algorithm on it, then they would be capable of breaking almost all currently deployed public key cryptographic algorithms. In this talk, I’ll explain the nature of this threat, and how the cryptographic research community, the tech industry, and governments are responding to it. 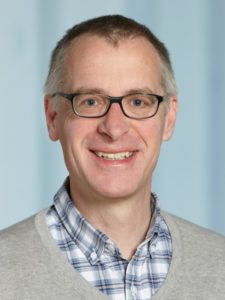 About the speaker: Kenny obtained a B.Sc. from the University of Glasgow and a Ph.D. from the University of London, both in Mathematics. He was then a Royal Society Fellow at the Institute for Signal and Information Processing in the Department of Electronic Engineering at ETH Zurich. After that, he was a Lloyd’s of London Foundation Research Fellow at Royal Holloway, University of London. Most recently, Kenny joined ETH Zurich as a Professor of Computer Science in April 2019. Kenny’s research over the last two decades has mostly been in the area of Cryptography, with a strong emphasis being on the analysis of deployed cryptographic systems and the development of provably secure solutions to real-world cryptographic problems. He co-founded the Real World Cryptography series of workshops to support the development of this broad area and to strengthen the links between academia and industry. He is co-chair of the IRTF’s research group on Cryptography, CFRG. This group is working to provide expert advice to the IETF in an effort to strengthen the Internet’s core security protocols. His research on the security of TLS (the Lucky 13 attack on CBC-mode encryption in TLS and attacks on RC4) received significant media attention, helped to drive the widespread adoption of TLS 1.2 with its support for modern encryption schemes, and was an important factor in the TLS Working Group’s decision to abandon legacy encryption mechanisms in TLS 1.3.

Tickets: The event is free of charge, but registration is recommended.

This event is supported by the Aalto University School of Science.